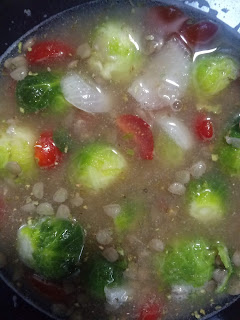 This is one of my classic homemade favorite soups! You know why? It’s based on left overs with just Brussels Sprouts added! If you been reading my posts for a while you KNOW I don’t like wasting food so making soup is one of those tips to fix to much food left over in the fridge. Food is NOT cheap so not wasting much if not anything saves major 💵 money. Who does not want/like saving money?! Let me tell you what went into this!

I had my favorite lentils, sliced raw onions, sliced cherry tomatoes all had got down to about a quarter cup left from the week of meal making. I pulled out of the freezer a bag of Brussels Sprouts that I bought from Kroger, washed them thoroughly under water and put them in a bowl of water, that covered them over at least an inch. Then added the lentils and cooked in the microwave for about 4 minutes on high. Then took it out with oven mitts, then added the onions and tomatoes with all my favorite seasonings! Now in case you are wondering why not cook tomatoes with the onions from the beginning? That’s a good question! I did not do that because the tomatoes on 4 minutes will become mushy, I don’t like a mushy tomatoes in my soup if I have control over it! The onions could have cooked but for this soup I wanted a crunch to break up the soft elements.  If you choose to cook this definitely put your spin on it... maybe mushy works for you.

Happy Eating! Now on to the next blog post...